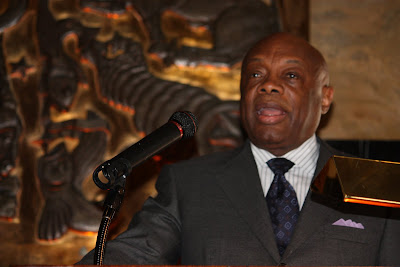 BOMA San Francisco was proud to welcome former San Francisco Mayor Willie Brown to the City Club on January 28, 2010 to address BOMA San Francisco members for this month's member luncheon.  Affable and charismatic, Mayor Brown dazzled the audience with his thoughts on a number of issues including Obama's first year in office, the economy, the issues State of California is facing, and so much more.  The following are a few of the highlights:

Mayor Brown commented that the expectations were very high for President Obama--the nation wanted change in every sense of the word.  One thing that most incoming politicians forget to do, according to Brown, is "to get off the campaign and govern" and President Obama is no exception.  Brown noted that he has yet to produce the effectual change that was so widely promised during President Obama's campaign.  "Obama should have been clearer--that quick change will not be a reality" Brown said, " very low goals should have been set with monthly reports on progress.  Over a 12 month period he could have had a list of low-level items that would have been more successful than the administration's current attempts at reform."

Brown suggested that the overall takeaway from President Obama's State of the Union on January 27, 2010 was that there is clearly a "reflective lack of relationship" between the Republicans and Democrats in Washington.  He mentioned that unless there is more collaboration between the two parties, there will be no change to the status quo at our nation's capitol.


Mayor Brown reflected on the stimulus package set forth by the Obama Administration in 2009 by noting that the stimulus money was good for California and the local economy here San Francisco. Indeed, those funds have helped fund the Transbay Terminal and High-Speed Rail projects.  Most importantly, the stimulus dollars created much needed jobs for the unemployed.

The current outlook of California is, according to Mayor Brown, "bleek".  Brown elaborated on his feelings on the current political and economic status of the state by saying that there is "a misunderstanding of how to manage at the state level...the governor and the legislature aren't working well together so they can't accomplish much for the people of California."

BOMA San Francisco thanks Mayor Brown for taking the time to speak to the membership and for his leadership for the City and County of San Francisco.
Posted by John Bozeman at 7:47 PM