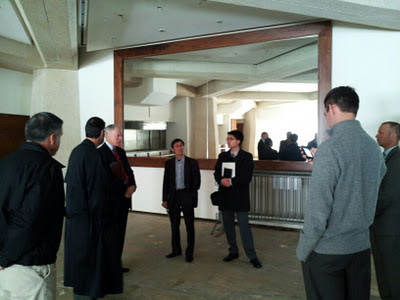 BOMA San Francisco hosted a building tour of the Transamerica Pyramid for Supervisor Eric Mar and City Hall staff on December 8, 2011. Finished in 1972, the 48-story building is a great example of how a high-rise building is managed, and how an existing building can be retrofitted to address today's energy efficiency requirements and accommodate tenants in a modern office environment.

BOMA San Francisco would like to thank Supervisor Mar and City Hall staff members for taking the time to tour the  Transamerica Pyramid. BOMA appreciate's our relationship with the Supervisor and we look forward to working with him more on issues that affect both the commercial real estate industry and the City in the future.

We would also like to thank the Cushman and Wakefield management team at The Pyramid Center for organizing the tour: Phil Rapoport, General Manager; Jackson Talbot, Director of Security; and, Doug Peterson, Chief Engineer.
Posted by John Bozeman at 4:49 PM No comments:

Please click on the print article, above or here, to read the op-ed piece, Time to admit failure of ranked-choice voting, by Marc Intermaggio, BOMA San Francisco's Executive Vice President, published in the San Francisco Examiner on December 8, 2011.
Posted by John Bozeman at 2:24 PM No comments:

We applaud President Obama’s new energy policy to improve energy efficiency in commercial, multi-family and institutional buildings. The initiative includes the critical business incentives, such as the commercial building tax credit and loan guarantees, that are key to meeting the energy efficiency goals of the plan. BOMA International has been a leader in energy efficiency for years, launching the 7-Point Challenge in 2007 which asked members to reduce energy consumption by 30% by 2012.

In his position as chief operating officer at Stream Realty, Ray Mackey has helped to grow Stream’s leasing and management portfolio from 750,000 square feet of commercial space to more than 60 million square feet in six major markets throughout the Southwest, Southeast and West Coast areas. Before joining Stream Realty in 1999, Mackey worked for Trammell Crow Company, Rostland Property Management Company, Texas Instruments and served with the United States Air Force.

Mackey has been a BOMA member since 1984. He has served as president of Dallas BOMA, director of the Texas BOMA Board of Directors and president of Texas BOMA. He has been active in numerous committees at BOMA International, chairing the Education Committee, the Education Advisory Council, the Nominating Committee, the Reinventing Major Meetings Task Force and the BOMA 360 Performance Program Council. He has also served two terms on the BOMA International Executive Committee.
Posted by John Bozeman at 3:49 PM No comments:

BOMA Set to Take over Capitol Hill – Join Us!

Join your BOMA peers and colleagues as they hit the halls of Capitol Hill during the National Issues Conference. There’s nothing more invigorating than playing your part in the political process and meeting face–to–face with legislators on the issues that impact commercial real estate. It’s one of the most effective ways we communicate our message. And whether you’re a NIC pro or a first–timer, we’ll prepare you to speak with lawmakers during the "How to Lobby Workshop." Plus, NIC attendees will hear first–hand from Congressional guest speakers and Keynote Speaker Tucker Carlson.

Want to know more about NIC? Check out the latest Board Briefings video with the low–down on what to expect.

Remember, the 2012 Winter Business Meeting and National Issues Conference will be held together this year, Jan 30 – Feb 1 in Washington D.C. It will be one power–packed meeting that you can’t afford to miss.

Register Today.
Posted by John Bozeman at 2:21 PM No comments:

Before the Thanksgiving holiday, the efforts of the Joint Select Committee on Deficit Reduction (the Congressional Super Committee) to identify $1.2 billion in spending cuts and revenue raisers ended in the partisan gridlock that has plagued the 112th Session of Congress since its beginning. Now, Congress is scrambling to resurrect its tax agenda and soften the effects of the mandatory spending cuts that will be automatically triggered by the committee’s failure beginning in 2013.

As early as Friday, December 2, 2011, Congress could vote on legislation to extend the social security payroll tax cut implemented last year; however, unsurprisingly, Congress cannot agree on how to pay for it. Democrats favor a surtax on income in excess of $1 million a year, while many Republicans would like to consider some of the spending cuts that were identified by the Super Committee, such as a salary freeze for federal workers.

In addition, individual and business tax breaks totaling approximately $55 billion will expire at the end of the year, including the 15–year depreciation period for leasehold improvements, which absent Congressional action will revert back to 39 years on January 1. Also included of interest to BOMA members is the brownfield remediation provision that allows owners to write–off brownfield remediation costs in the year they are incurred instead of at the time the property is sold. BOMA and our coalition partners have been working to press Congress to take immediate action on the extenders package.
Posted by John Bozeman at 2:11 PM No comments: