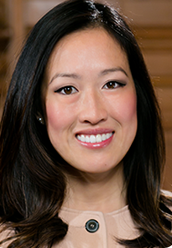 Mayor Ed Lee signed the Lactation in the Workplace ordinance on June 30, 2017. It is effective as of July 30, 2017 and operative on January 1, 2018. Please email johnb@boma.com with any questions you may have.

The San Francisco Board of Supervisors have approved the Lactation in the Workplace ordinance. It now goes to Mayor Ed Lee for his approval. We expect him to sign the measure.

Click here to review the language of the ordinance.

As mentioned in our May 31st post, BOMA's major concerns with this measure were addressed by Supervisor Katy Tang and her staff. Again, thanks to the months-long involvement of BOMA San Francisco's Government Affairs Committee members - led by BOMA San Francisco Board Member, and former president, Blake Peterson and Government Affairs Committee Vice Chair, Justin Sacco - we are pleased to announce that nearly all of our industry's suggested amendments to the San Francisco Lactation in the Workplace Ordinance were accepted by Supervisor Tang.

They include:
BOMA members are appreciative of this collaborative effort as an example of how public policy should be created.


If you have any questions, please email johnb@boma.com.

The result is a much more realistic measure for the employer, the building owner and - most importantly - the employees who will be using lactation rooms in their respective workplaces. 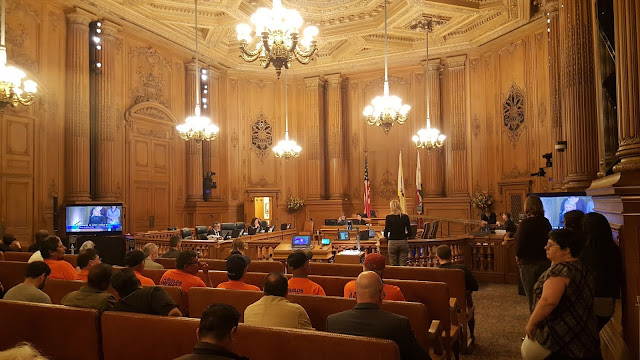 Blake Peterson provided BOMA's comments at the most recent San Francisco Board of Supervisors Land Use and Transportation Committee hearing (pictured above) on May 22, 2017. Blake publicly thanked Supervisor Tang and her staff for working with BOMA members and our business community partners on this measure.

We are waiting for the updated draft of the legislation after its review by the San Francisco City Attorney's Office. There were numerous substantial amendments approved on May 22nd and we will summarize them all in a future post so please stay tuned!

If you have any questions, please email johnb@boma.com.

The BOMA San Francisco Government Affairs Committee meeting with Supervisor Tang on April 5th was very productive. Our members provided essential feedback that reflected the good intent of the legislation with the reality of implementing the requirements, as written.

We are working with the Supervisor and her staff, to amend the legislation to reflect the correct entity that should be in charge of permit approval for building a lactation room in new and existing buildings - the project sponsor who is generally the tenant - and continuing the discussion with our business community partners regarding the total number of rooms required based on occupancy of the tenant space.

Stay tuned! We thank Supervisor Tang and her staff for understanding our members' concerns.


Provide Your Feedback on April 5th!

NOTE that the BOMA San Francisco Government Affairs Committee will be meeting with Supervisor Tang on April 5th to discuss this ordinance. Please email the Chair of the Committee, Marty Smith at msmith@alhousedeaton.com and johnb@boma.com if you'd like to attend and provide your feedback. The measure will be moving quickly through the San Francisco City Hall legislative process in April so your involvement is appreciated.

Why Was This Ordinance Introduced?

A similar law introduced by Supervisor Tang and enacted in 2016 created a policy to help city employees transition back to work after having a child. The Lactation Accommodation Policy for city workers provides new mothers with lactation accommodations and encourage flexibility in the workplace.

The Supervisor would like the private sector to follow San Francisco's lead and help mothers as they come back to work. BOMA members feel that employees should be supported in reasonable way that makes sense to the small business tenant, building owner, and to the employees.

What Would The Law Require?

The new 2017 law, if passed, would affect the private sector:


How Has BOMA Been Involved?

We appreciate that Supervisor Tang and her staff allowed for our members, Blake Peterson, former BOMA San Francisco President and member of the Board, and Justin Sacco, Vice Chair of BOMA San Francisco's Government Affairs Committee, to provide input on her proposal early in the legislative process.

How Could This Legislation Affect My Commercial Property?

The legislation primarily targets private sector businesses (tenants). Even so, there are requirements for new and renovated buildings that could affect BOMA San Francisco members.

Take a look at pages 12-14 of the ordinance to determine if that is the case.

We were successful in amending the language for adding a lactation room for new/renovated buildings from a square foot requirement to a much more reasonable occupancy load specification of a given renovation project. Even so, the triggers requiring a building owner/project sponsor to add a certain number of lactation rooms, specifically for renovated existing buildings, might still be a bit too high. This happens when:
If these prerequisites are met, then the project shall include a lactation room(s) as follows: 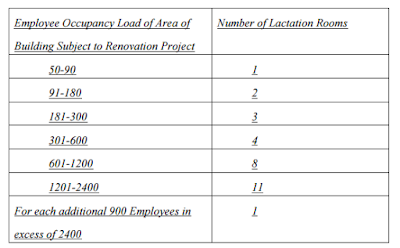 There may be other concerns so we want to hear from our BOMA member community. Please send your comments to johnb@boma.com and plan to attend our next Government Affairs Committee meeting on April 5th. Details: https://members.bomasf.org/BOMASF/Event_Display.aspx?eventkey=GAPAC17APR.