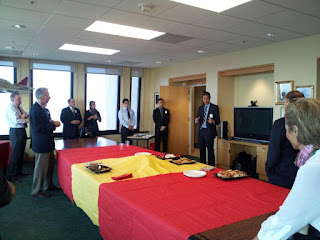 The BOMA San Francisco Political Action Committee (BOMA SF-PAC) held a reception for BOMA's endorsed candidate for California State Assembly District 19, Mr. Michael Breyer recently. It was a well attended event.  We thank all the BOMA members who attended and contributed to Mr. Breyer's campaign.  If you could not attend the event and would like to contribute to Mr. Breyer's campaign, please click here.

You can view pictures from the reception by clicking here.

Please consider joining the BOMA San Francisco Political Action Committee (BOMA SF-PAC) for a reception to honor Michael Breyer on August 23rd.  Mr. Breyer has been endorsed by the BOMA SF-PAC for the 19th District of the California Assembly.  Be sure to follow Mr. Breyer on Twitter and 'Like' him on Facebook!

Mr. Breyer is a San Francisco Library Commissioner, the son of U.S. Supreme Court Justice Stephen Breyer and is a Stanford University graduate.  He is a firm believer in the spirit of entrepreneurship as he is the co-founder of Courtroom Connect.  Mr. Breyer is also the founder of the Draft Ed Lee campaign.

In the Assembly seat Mr. Breyer will focus on:
Posted by John Bozeman at 10:26 AM