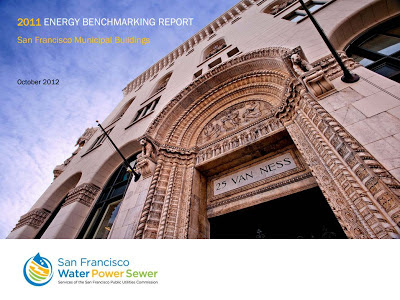 The San Francisco Public Utilities Commission (SFPUC) has published a report detailing the energy performance of over 300 of San Francisco’s municipal facilities during the calendar year of 2011, including more than 37 million square feet of building area.

As the owner and occupant of hundreds of buildings, the City and County of San Francisco has chosen to lead by example and provide transparency about its own operations. By compiling the data in this report for the first time and releasing it publicly, the City hopes individual departments obtain a fresh perspective on their own facilities, in order to track energy performance successes and help focus attention and resources on buildings that may benefit the most from energy-related improvements.

This benchmarking effort is part of the SFPUC’s larger energy efficiency and green building program. Indeed, the SFPUC has completed over 150 energy efficiency projects in municipal buildings, which are saving the City approximately $4.6M each year.

The catalyst for producing this report is the San Francisco Existing Commercial Buildings Energy Performance Ordinance approved by the Board of Supervisors and signed by Mayor Edwin M. Lee in February 2011.

BOMA San Francisco's applauds the City and County of San Francisco for leading municipalities in environmental sustainability and stewardship.  BOMA members look forward to partnering with the City of San Francisco achieve it's future environmental goals.  Indeed, the Existing Commercial Buildings Energy Performance Ordinance is a manifestation of a true private/public agency partnership.
Posted by John Bozeman at 11:29 AM