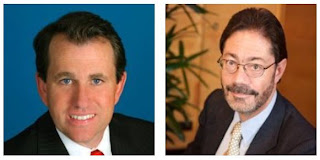 Charging fees for drivers entering and leaving San Francisco during rush hours would be an inefficient and economically damaging way to manage traffic. Effectively managing traffic flow is the problem, not banning cars. Better traffic management — especially at intersections leading to and from the bridges — and better enforcement — especially against double parkers and those who block intersections — would greatly reduce congestion. Allowing a full roll-out of the SFPark program will further improve traffic flow because drivers will know where to find on and off-street parking.

The economic growth our city is fortunate to be experiencing has brought new construction, temporarily constricting traffic. This isn't a permanent disruption and a new tax won't improve traffic flow.

We need a mass transit system that quickly and reliably gets people from one place to another. BART is already at maximum capacity during rush hours, and our number of dedicated transit lanes for buses is minuscule compared to the need. Muni is underfunded and has been under-maintained for years, thus leading to our current numerous Muni breakdowns, delays, and poor reliability. But have we really had a money problem or bad management decisions by those allocating our tax dollars? And could we be sure any new congestion tax would be used to improve Muni? And how much would be eaten up in administering this new "fee", as the bureaucrats like to call it?

San Francisco is not a city like London, or Stockholm or any of the cities that have implemented congestion pricing. We are not the only game in the Bay Area. If we tax people to come into San Francisco to work, play or shop, will we lose those jobs, those sales, and those customers to our surrounding counties that aren't so eager to tax their citizens? A congestion fee would also hurt the working poor, who can least afford another daily expense to keep their jobs. Others with children can't take transit, or work in jobs that require a car. And the Bay bridges have already implemented "congestion pricing" on their bridge tolls. Isn't that enough of a transit tax?

Of course, commuters would bear the brunt of any congestion tax, most of whom live outside of The City, so charging them is good for San Francisco, right? Wrong. How long would it take before similar barriers would be erected on their side of the Bay or border? And who would ultimately suffer? We all would suffer with reduced commerce, job loss, and even greater distrust of our local governments. In short, congestion pricing is an idea whose time has not come, and should never come for San Francisco.

Let's improve traffic flow with better traffic management and enforcement, new technologies to help drivers find available parking, and better mass transit service. Let's ditch this idea of congestion pricing in San Francisco once and for all.
Posted by John Bozeman at 5:37 PM