Government Affairs Public Advisory (GAPAC) committee members recently enjoyed a presentation on the Lucas Cultural Arts Museum proposal (one of three contenders) in the Presidio of San Francisco.  Details of the project can be reviewed here. 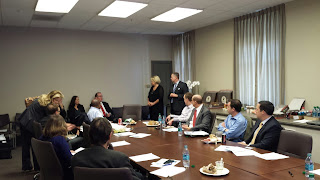 Thank you to our presenters David Perry and Melanie Blum for their time.


The Lucas Cultural Arts Museum is based in George Lucas’ passion for education and the role art can play in inspiring young people. Visual storytelling is a significant part of our cultural heritage. This museum will provide the Presidio community with a state-of-the art interactive facility that will nurture curiosity, ignite imaginations and broaden the spirit of adventure for children and families, schools and educators, as well as visitors from around the world.

In November 2012 the Presidio Trust issued a Request for Concept Proposals. Sixteen responses were submitted. After considering public comment and engaging with a number of the teams directly, the Trust invited three teams to continue in the process via a Request for Proposals (RFP) that was issued in May 2013. Final proposals are due September 16, 2013. The teams are listed below.

Individual BOMA members can learn more about these proposals, including the timeline for final approval by clicking here.