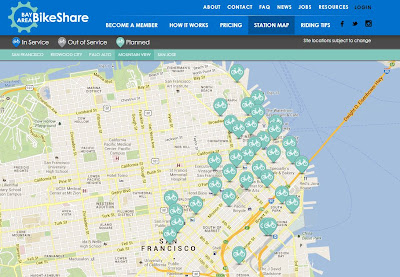 Bay Area Bike Share (BABS) is a new bike share system, providing the 'last mile' connection between public transit and the office, as well as an easy way to zip around town. BABS has created a corporate partnership program that helps local companies offer discounted and subsidized annual memberships to employees.

Help make it easier, faster and more enjoyable for your staff to get to work! Whether there’s a meeting downtown, or an errand nearby, Bay Area Bike Share is a great alternative to driving. They have options for organizations of all sizes that enables them to choose a level that matches the contribution the company provides to employees.  It’s one of the most affordable benefits a company can provide.

The Bay Area Bike Share pilot program will commence soon.  Please click on the map above or here to review where the proposed bicycle stations may be situated.  If you own or manage property adjacent to a station and have not been contacted by the San Francisco Municipal Transportation Agency (SFMTA), email Matt Lasky at matt.lasky@sfmta.com. 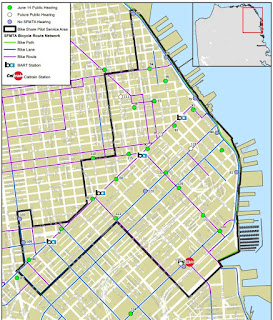 The Sustainable Streets Division of the San Francisco Municipal Transportation Agency (SFMTA) is proposing the placement of 35 bicycle sharing stations in San Francisco as shown in this map.  Please review it and forward the image to other interested parties.  Responses should be sent to Matt Lasky at matt.lasky@sfmta.com if you wish to receive more details about specific station information including the size and location.

Stations, which require no physical connections for its operation, will house a payment kiosk powered by a solar mast and battery backup, a map panel for system information and station sponsorship, and docks to hold bicycles for public use. Station locations were selected in close proximity to transit connections, bicycle facilities, and employment and residential centers and where there is the best access to potential users of the system.

Opinions on the proposed placement may be filed in writing prior to the hearing by email to Matt Lasky or sustainable.streets@sfmta.com with the subject line 'Public Hearing'.  Submitted opinions will become part of the official public record and will be brought to the attention of the person(s) conducting the hearing. For additional information about San Francisco’s bicycle sharing program, please visit http://www.sfmta.com/bikesharing.

The San Francisco Municipal Transportation Agency will be hosting the first local open house for Bay Area Bike Share on Thursday, May 30. 2013 at the North Light Court in San Francisco’s City Hall, from 5:30 p.m. – 7:30 p.m.  Attendees will have an opportunity to learn about and discuss bicycle sharing, the regional pilot, and planning and implementation details for San Francisco. The public is invited to share ideas for pilot and expansion station locations for the new bike share system.

On February 26, 2013, the Bay Area Air Quality Management District issued a notice to Alta Bicycle Share authorizing them to deploy and operate a pilot regional bike-sharing system in the cities of San Jose, Palo Alto, Mountain View, Redwood City and San Francisco. The first phase of the project will deploy a fleet of approximately 350 bicycles and 35 kiosk stations in San Francisco and is anticipated to launch by August 2013.

The SFMTA is prioritizing locations for the first 35 stations and will be reengaging with the public and contacting properties adjacent to these locations.

If you have any questions please contact Matt Lasky at matt.lasky@sfmta.com.

Bike sharing is coming to San Francisco! A regional pilot program led by the Bay Area Air Quality Management District (BAAQMD) in partnership with the SFMTA will bring approximately 50 bike share stations and 500 bikes to San Francisco’s downtown core beginning in spring 2012. The SFMTA is working with a regional team to implement this pilot along the Caltrain corridor in San Francisco, Mountain View, Palo Alto, Redwood City and San Jose and shown in this Regional Bike Sharing System map. The project is funded through a combination of local, regional and federal grants with major funding coming from the Metropolitan Transportation Commission’s Innovative Bay Area Climate Initiatives Grant Program (BACI).

What is bike sharing?

Similar to car sharing, bicycle sharing is a term used to describe a membership-based system of short-term bicycle rental. Members can check a bicycle out from a network of automated bicycle stations, ride to their destination, and return the bicycle to a different station. Bicycle sharing is enjoying a global explosion in growth with the development of purpose-built bicycles and stations that employ high tech features like smartcards, solar power, and wireless internet and GPS technologies.

Who is involved with launching the San Francisco bike sharing system?

The BAAQMD is the overall regional project lead, coordinating the planning and implementation efforts of the local partners: the City and County of San Francisco, the Cities of San Jose, Mountain View and Palo Alto in Santa Clara County and the City of Redwood City in San Mateo County. The SFMTA is leading the project in San Francisco, and we are working in cooperation with our City and County partners, including the Planning Department, Department of Public Works, San Francisco Recreation and Park Department and the Port of San Francisco. The regional partners will be selecting a contractor in fall 2011 to install, operate, and manage the system.

Where will bike sharing be located in San Francisco?

As the San Francisco Bicycle Sharing Pilot Service Area map (PDF) presents, in San Francisco, the pilot service area will be centered in San Francisco’s employment- and transit-rich Downtown/SOMA corridor between the Financial District, Market Street and the Transbay and Caltrain terminals. This area is notably flat, has the densest bikeway network coverage in San Francisco and enjoys the highest levels of cycling, yet those who commute by transit from cities to the east and south encounter difficulties bringing a bicycle with them on BART or Caltrain. Much of San Francisco’s densely urbanized northeastern quadrant is similarly well-suited to bicycle sharing.

When will bike sharing launch in San Francisco?

The regional partners will be selecting a vendor to install, operate, and manage the bike sharing system in 2011 with the goal of a system launch in Spring/Summer 2012!

If you have any questions, comments or feedback about bike sharing, contact the SFMTA atsustainable.streets@sfmta.com.
Explore:
Overview
Pilot Area
Posted by John Bozeman at 4:10 PM