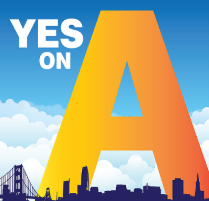 BOMA San Francisco supports Proposition A on the November ballot.

If approved, the bond measure would allocate $425 million to finance a portion of the construction, reconstruction, acquisition, improvement, demolition, seismic strengthening, and repair of the Embarcadero Seawall and other infrastructure.


Click here to volunteer and/or contribute to the campaign.

From Fisherman's Wharf to Mission Creek, San Francisco's Seawall serves a vital role in supporting the San Francisco shoreline. This important yet unseen infrastructure is one of the oldest in the entire city and was designed before there was a modern understanding of seismic safety standards. Over the last century, while the Seawall has settled, cracked, and eroded, there have been many advances in engineering, technology, and construction practices to better safeguard the city against disasters and rising sea levels. Today's Seawall is in dire need of upgrades so that it can continue to uphold the foundation of San Francisco's iconic waterfront.

Yes on A is the first step to funding these much needed repairs.

San Francisco's bond program is carefully managed with independent oversight and regular audits, and will not increase property taxes or rents. It requires a 2/3 majority to pass. For more detailed information about Proposition A, please read the Bond Accountability Report here.