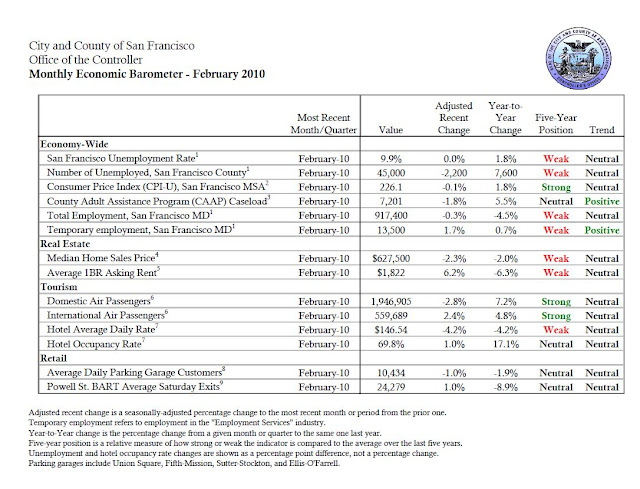 The national business press is abuzz with news of economic recovery, but the local statistics are showing few signs of growth as of February 2010.

San Francisco's unemployment rate has dipped below 10% again, but on a seasonally-adjusted basis this represents no change from January. Among the pieces of good economic news locally has been several months decline in the City's County Adult Assistance Programs Caseload, which has declined 4.5% just since December.  Temporary employment, a leading indicator of broad-based job recovery, has continued its monthly climb and is now higher than it was last February.  Total employment in the San Francisco area is still 4.5% below where it was last February.

Both February and March have been strong months for retail sales nationally, with significant growth over the same months last year.  Locally, sales tax data is not yet available, but indications from BART and city-owned parking garages suggest no major upswing occurred in February.

In the hotel industry, February marked the first month since September, 2008 that Revenue per Available Room Night (RevPAR) showed annual growth, up 11% from February 2009.  However, the monthly seasonally-adjusted trend in RevPAR remains weak, and despite the year of growth, this month's RevPAR was still 29% lower than it was two years ago, in February 2008.
Posted by John Bozeman at 3:41 PM