Please click here to access the Controller’s interim report on the two alternative proposals to the current payroll tax structure in San Francisco that was just published.   The rational for a tax on commercial rent is found on page 18 of the report.  Please email Ken Cleaveland, BOMA San Francisco's Director of Government Affairs at kenc@boma.com, and John Bozeman, BOMA San Francisco's Legislative Assistant at johnb@boma.com with any comments you may have. 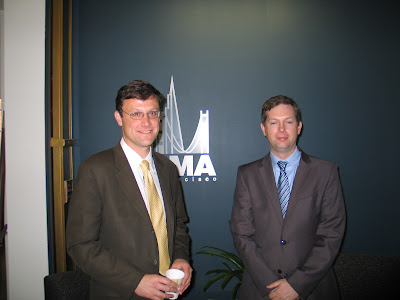 Ben Rosenfield, Controller for San Francisco and Ted Egan, the City's Chief Economist
BOMA San Francisco's Government and Public Affairs Committee welcomed Ben Rosenfield, San Francisco's Controller, and Ted Egan, the City's Chief Economist on May 5, 2010 to present two alternative proposals to the current payroll tax structure in San Francisco.  Both include a commercial rent tax.  You can view the presentation by clicking here. With either proposal, the City expects to raise approximately $18 million annually from a commercial rent tax by charging 1.395% on the gross receipts for renters of commercial property.
Background
Mr. Rosenfield mentioned that his staff has been researching this issue for about five months; in April they were able to produce real numbers to solicit feedback from the various stakeholders in the business community that would be affected by the two suggested payroll tax changes.  The Controller's office was asked by the Mayor Gavin Newsom and Board of Supervisors President David Chiu to study this question:  What is the most efficient way to collect money from San Francisco taxpayers?  According to Mr. Rosenfield, the goal in answering this question is to not generate more tax revenue, but to identify if there is a better taxing system to use in San Francisco.
Mr. Egan prefaced the presentation by stating that San Francisco is the only city in California that charges only a payroll tax as opposed to a combination of taxes: payroll tax, commercial rent tax, etc.  As a result, two types of payroll taxes have emerged (see below) that, according to Mr. Egan, may allow a switch from a stand alone payroll tax to a hybrid tax system that is better for the business community and will help create private sector jobs.
Proposal 1: Progressive Payroll Tax 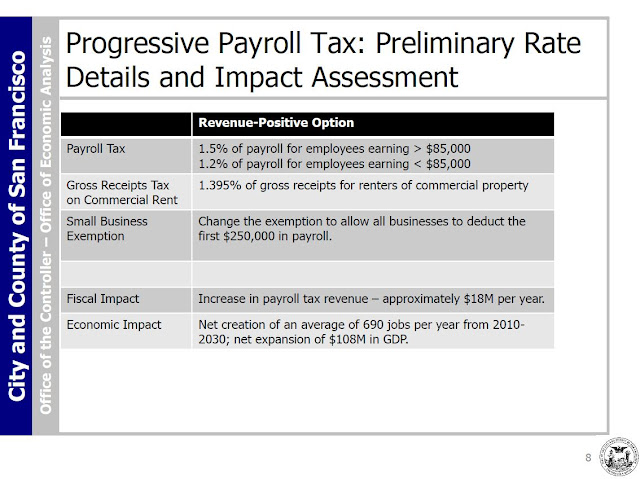 Click on the image to enlarge.
Proposal 2: Gross Receipts Tax 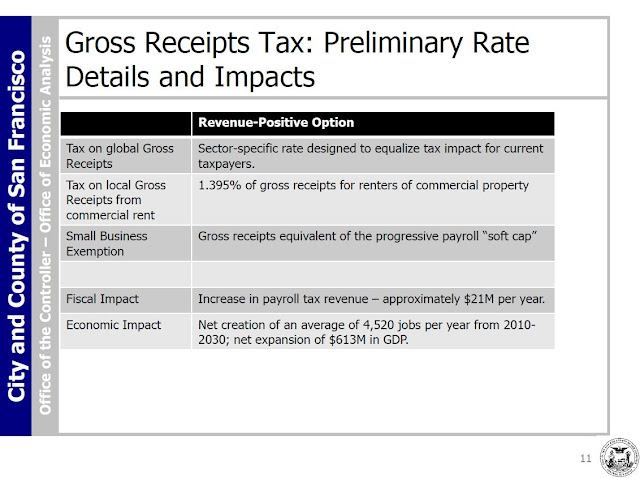 Click on the image to enlarge.
Key Points
We Need Your Feedback!
Both Mr. Rosenfield and Mr. Egan are requesting feedback on these two proposals from BOMA San Francisco members, affected stakeholders and the general public over the next two weeks.  A interim report will be available shortly--we'll post that report on the blog once we receive it.  The Controller's office will then compile the data collected and produce a final report on the two proposals by the end of May.
Please email Ken Cleaveland, BOMA San Francisco's Director of Government Affairs at kenc@boma.com, and John Bozeman, BOMA San Francisco's Legislative Assistant at johnb@boma.com with any comments you may have.
Posted by John Bozeman at 6:39 PM