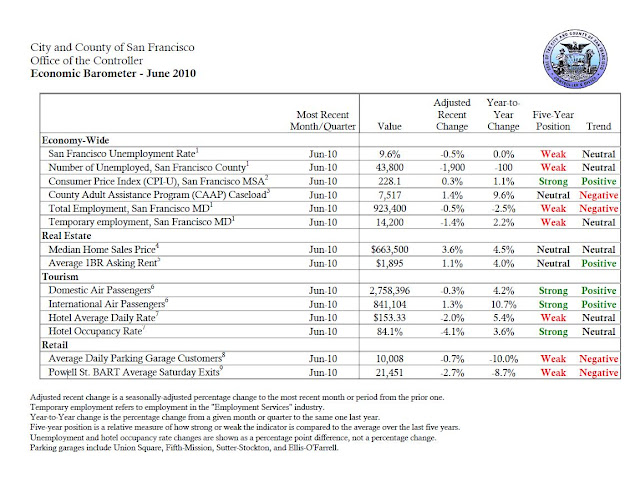 Click on the image to enlarge
From the Controller's Office:
June's unemployment rate in San Francisco was 9.6% in June, unchanged from the previous June. While this marks an improvement over the double-digit unemployment seen earlier in the year, and San Francisco is still relatively strong relative to the rest of the state, the stubbornly high rate reflects the weak, unsustained job recovery to date. Overall employment growth in the 3-County Metro Division stalled in May and June.

After a few months of positive news on the job creation front, June's jobs total for the Metro Division was the lowest since 1995.

What recovery we have seen in San Francisco has been uneven and inconsistent. Despite continuing strength in airport traffic, the recovery in the hotel sector has been uneven. On a seasonally-adjusted basis, there has been essentially no change in occupancy or average daily rates since last fall. Our indicators of retail traffic--parking garage use and Saturday BART visitors to Powell Street, show continuing weakness and are still at or near their low points of the recession.

Like the job market, San Francisco housing prices had been on the upswing for most of the year, but May brought a sharp reversal, and June only a limited rise. While average sales price is a highly imperfect measure of trends in the market, the two months have ended a positive trend. Apartment rents tell a different story; average rents have risen 12% since January and the rise has been continuous. Average rents are still 15% below their peak in September, 2008, however.
Posted by John Bozeman at 2:53 PM