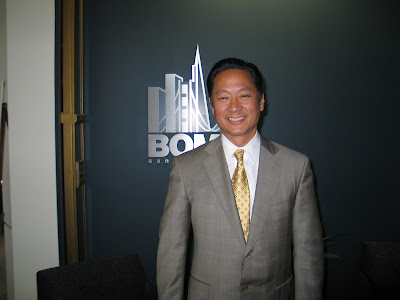 The BOMA San Francisco Political Action Committee (BOMA SF-PAC) has not taken a formal position on Mr. Adachi's charter amendment at this time.  We'll post that information on the blog when it is available.

From the SF Smart Reform Website:
WHY IS IT NECESSARY TO PUT A PENSION REFORM CHARTER AMENDMENT ON THE BALLOT?
San Francisco's pension and health care costs for its city employees has been rising exponentially. From $175 million just five years ago, the city must pay $525 million this year. Within two years, the city will be paying $675 million. This is because whenever the city's pension system loses money, taxpayers must make up the difference.
I'M NOT A CITY EMPLOYEE. WHY SHOULD I CARE ABOUT THE COST OF EMPLOYEE PENSIONS?
The rising cost of city employee pensions should be of concerned to anyone who lives or works in San Francisco. The quality of life in our city is directly tied to funding that is available to pay for essential city services, such as street cleaning, parks, health care and schools.
WHAT WILL HAPPEN IF PENSION COSTS CONTINUE TO RISE?
If the City's revenues remain stable, the costs of pensions will eventually rise to the point that the city is unable to pay. Currently, the costs the city must pay towards pensions are about 13.5% of salaries ($525 million); by 2015, the city will be paying 25% ($812 million).
WHAT WOULD THIS CHARTER AMENDMENT ACCOMPLISH?
This Charter Amendment would require that city employees make additional contributions to their pensions. Most employees now pay between 0 and 7.5% of their pay into the pension fund. This would require police and fire employees to pay 10% and all other employees to pay 9%. It would also require employees to pay 50% of the cost of health care for any dependents. Currently, the City pays 75%. 100% of the health care costs of the employee would still be covered.
HOW MUCH WOULD THIS MEASURE SAVE TAXPAYERS?
This measure will help save approximately $170 million annually. The Controller, who is in charge of overseeing the City's finances, will provide a cost-savings analysis in the ballot statement.
WOULD THIS CHARTER AMENDMENT REDUCE A CITY EMPLOYEE'S PENSION UPON RETIREMENT?
No. City employees would still receive the pension benefits they were promised when employment was accepted. However, the amount that employees contribute to their own pensions would be increased to help off-set the city's pension costs.
WHAT TYPE OF PENSION DO CITY EMPLOYEES RECEIVE?
City employees receive a defined pension benefit. Upon retirement, they receive a guaranteed income based on the number of years of service. Most receive lifetime health benefits, based on the years of service.
SHOULD CITY EMPLOYEES BE SUPPORTIVE OF THIS MEASURE?
Yes. Currently 40% of the City's workforce is eligible to retire. If the City's pension costs continue to rise, the City will eventually be unable to pay its pension costs. At this point, the City can declare bankruptcy, as Vallejo did, and attempt to renegotiate its contracts and pension obligations with its employees. This is a preventative measure that will help San Francisco avoid Vallejo's fate.
BUT IS IT FAIR TO INCREASE AN EMPLOYEE'S PENSION CONTRIBUTION. ISN'T THAT A VESTED RIGHT?
Under the City Charter, section A8.525, employees can pay up to 10% for their pensions. This section was passed in 1932 and provides a limit as to the percentage an employee can be required to contribute to his or her pension costs.
Posted by John Bozeman at 5:09 PM