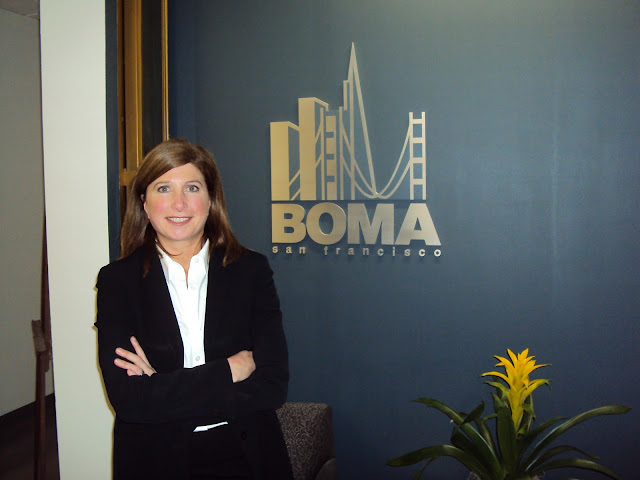 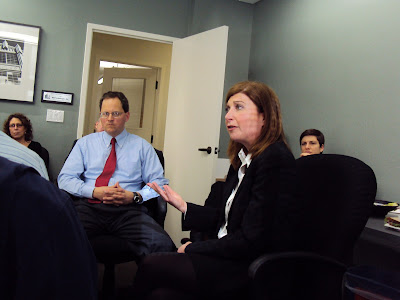 BOMA San Francisco Members:
Joanna Rees, candidate for Mayor of San Francisco, spoke at BOMA's Government and Public Affairs Committee (GAPAC) meeting on January 5, 2011.  Your BOMA San Francisco Advocacy Team has met with Joanna previously, but today was Joanna's first chance to address the members of the GAPAC.  Please click here for her background.
As a successful entrepreneur and founder of the firm, VSP Capital, Ms. Rees is a political Independent, and is interested in meeting with all the various organizations and community groups that comprise the diversity of San Francisco politics. Her top priorities are creating more jobs in San Francisco, making local government more efficient and accountable, and creating a world-class public school system.
Economic Development
Jobs, jobs, jobs. With her entrepreneurial work ethic, Joanna is motivated to get companies to move to San Francisco.  She mentioned that other cities around the country are actively lobbying companies to locate in their cities and San Francisco - a natural place for more international businesses to establish a U.S. base - should be doing the same thing. She cited the large amount of office space vacancies in the City - currently equivalent to 18 or 19 Bank of America (555 California Street) buildings as proof that we need to regain our "competitive edge" as a city in which to do business.
Public Education
Joanna quizzed the members of the GAPAC: What percentage of high school kids graduate in San Francisco?  The answer is 49%.  A shockingly high number and one that Joanna is committed to changing.   She stated that there "no downside to making our schools better" as it improves the social and economic well-being of the city. Joanna detailed two ways she will make this happen: increased administrative efficiencies and increased private sector philanthropic outreach. She gave the example of Facebook founder, Mark Zuckerberg, who recently gave over $100 million to the public school system in New Jersey, and said that was money that could have been spent on our schools, and students, if we had a long range plan for building a successful San Francisco school system.
Efficient Government
Joanna noted that other world-class cites are way ahead of San Francisco in transparency in government.  "Voters in San Francisco deserve to know how we spend and invest money in the local community in a transparent and viable way" said Joanna. She mentioned New York City where the Mayor there has the city's entire budget online in a powerpoint presentation so anyone can see exactly where their tax dollars are being spent. "We in San Francisco should do the same", said Rees.
Please click here to visit her website to learn more about Joanna Rees.
Posted by John Bozeman at 6:45 PM