For leading the business community in support of groundbreaking local legislation that will significantly expand bicycling as an option for employees in San Francisco. We were proud to partner closely with BOMA on the Employee Bicycle Access Bill, which was signed into law this year and ensures secure bicycle parking for San Francisco Employees. Thanks to BOMA’s support, San Francisco has the strongest bicycle access legislation in the country.

Thank you BOMA for building bridges and partnering with the San Francisco Bicycle Coalition for a stronger economy and a healthier workforce. 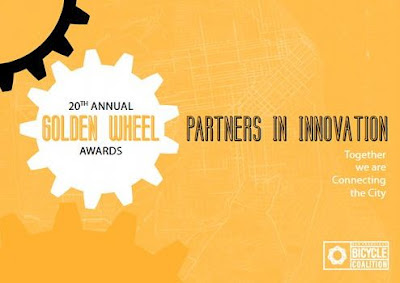 BOMA San Francisco's building owners and managers understand a bicyclist's continuous pursuit of sustaining the environment and promoting health-continuous commuting by bicycle.  Our association shares  that commitment and we will continue to be a partner with the San Francisco Bicycle Coalition.

This award would not have been possible if it hadn't been for the prudence of Supervisor John Avalos, as well as Leah Shahum and her staff.  Indeed, the SFBC's early outreach to BOMA members and willingness to work collaboratively is proof of the Bicycle Coalition's Commitment to bike riders in San Francisco.
Posted by John Bozeman at 3:47 PM