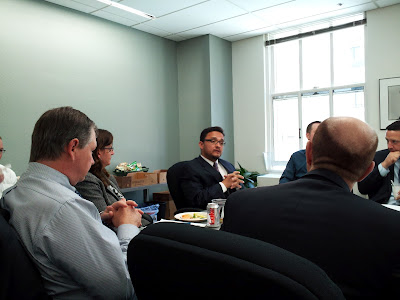 BOMA San Francisco's Government and Public Affairs Committee (GAPAC) welcomed Supervisor David Campos recently.  Mr. Campos provided an update of this work in District 9, City Hall and on other issues that are of concern to BOMA members:

Supervisor David Campos is a native of Puerto Barrios (Izabal), Guatemala, who came to the U.S. (with his parents and two sisters) when he was 14. Although he did not speak the language, David excelled in school, graduating at the top of his class from Jefferson High School, in South Central Los Angeles. David earned scholarships to Stanford University and Harvard Law School, from which he graduated, respectively, in 1993 and 1996.