To that end, please take a moment to fill out this brief survey to help the department with redesigning its web presence to serve the public efficiently.

The deadline for submitting your thoughts is February 7, 2014.

Click here to review BOMA San Francisco's Economic Impact Fact Sheet that details our members' contribution - including property and transfer tax revenue - to the City and County of San Francisco. 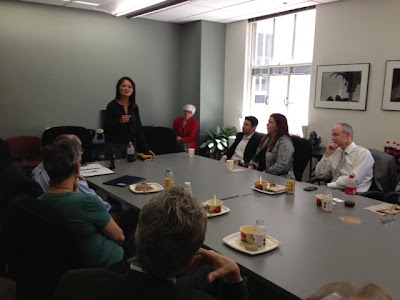 The topics discussed at today's meeting included:
As a former member of the Board of Supervisors, Assessor Chu has worked on policy issues with BOMA San Francisco for many years.  Our members look forward to Chu's leadership of this essential department.

Carmen Chu was elected to the Board of Supervisors in November 2008 and November 2010 to serve as the City’s representative to the Sunset/Parkside District after being appointed to serve in September 2007 by Mayor Gavin Newsom.

As member of the Board of Supervisors representing District 4, Carmen Chu served as Chair of the Board’s Budget & Finance Committee for FY 2011-2012 and FY 2012-2013. Together, with labor, community advocates, City departments, and the Mayor’s Office, the Board of Supervisors were able to agree on a $6.83 billion spending plan that provided funding for the most vital City services and closed a $380 million General Fund budget deficit.

During her time on the Board, Chu worked on legislation to encourage more companies to do business with the City by streamlining the City’s contracting process; provided protections to tenants who are victims of domestic violence; strengthened regulations, coordinated enforcement and expanded community review of proposed massage establishments; and encouraged small, local business participation in City projects.

Chu holds a Bachelor’s degree from Occidental College in public policy and a Master’s degree from the Goldman School of Public Policy at the University of California at Berkeley.
Posted by John Bozeman at 10:41 AM

Email ThisBlogThis!Share to TwitterShare to FacebookShare to Pinterest
Labels: San Francisco Office of the Assessor Recorder