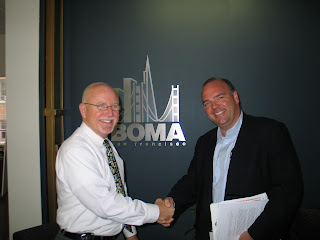 David Addington addressed BOMA San Francisco's Political Action Committee Board on October 27th detailing his hopes behind Proposition D, a measure he personally drafted and funded to obtain the required number of signatures to place on the November 3, 2009 city ballot. The ordinance is entitled the "Mid-Market Arts Revitalization and Tourism Special Sign District" and will apply to only two blocks, between 5th and 7th Streets on Market Street. It will create an exception to Prop. G, the 2002 citywide measure that banned all new signs in San Francisco.

Mr. Addington is passionate about re-vitalizing the Mid-Market area of town. A Georgia native, he came to San Francisco seven years ago to attend law school, met his wife, and dropped out of law school to begin his involvement in the city's commercial real estate community. He had opportunities to buy properties in the downtrodden mid-Market area, starting with the Warfield Theatre in 2005, and shortly thereafter picked up several other buildings including 988 Market Street and 1028 Market Street. He is the managing partner of Fair Market Partners, LLC. He saw an immediate need to clean up this area, not only for the property owners, but for the local residents, and the thousands of people who visit the Warfield and Golden Gate theatres each year for performances but hasten out of the neighborhood immediately after the shows because the area is dark, dangerous, and devoid of respectable activities, such as any good restaurants.

Addington wrote a complicated measure, but one that will do several things:
Proposition D, stated Addington, is supported by a wide array of folks, something that is unusual in San Francisco, especially when it involves land use and planning matters. This support includes the local Democratic Party, the SF Chamber of Commerce, BOMA, the San Francisco Planning and Urban Research Association (SPUR), the Market Street Association, the Police Officers Association, and a majority of the SF Board of Supervisors.

For more information, go to www.midmarketarts.com.
Posted by John Bozeman at 7:07 PM