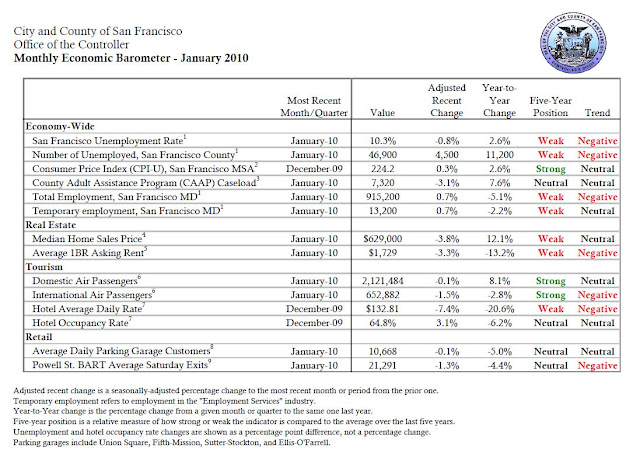 This issue of the Monthly Economic Barometer introduces seasonally-adjusted recent change information, to better highlight trends in the data that can be obscured by seasonal factors. This seasonal adjustment is performed by the Office of Economic Analysis and is not related to official seasonal adjusted figures released by other government agencies, such as EDD or the Bureau of Labor Statistics.
San Francisco's January unemployment rate of 10.3% was the highest reported for the recession to date, but January is historically a weak employment month. On an adjusted basis, January's unemployment was actually somewhat stronger than the disappointingly weak December holiday season. Nevertheless, the city's job market remains in limbo, with few signs of a sustainable recovery in employment.
The hotel industry has also lost whatever momentum it had in the fall of 2009, with disappointing months in both November and December. While airport traffic continues to be healthy, particularly on the domestic side, the growth in ridership is not yet leading to any recovery in San Francisco hotels. The two most timely retail indicators, Union Square BART and parking data, continue to show declines as well, though the drops are much shallower than what we saw earlier in the recession.

Like the hotel industry, home sales prices have also shown renewed declines since October, reversing several months of slight increases dating back to last spring. Median sales prices as low as January's have not been seen since last April. Asking rents for one-bedrooms on Craigslist reached their lowest point of the recession in January, although the steepest monthly drops appear to be behind us. All in all, San Francisco's economy appears to be at a trough, with few indicators getting seriously worse, but little sign of imminent recovery.
Posted by John Bozeman at 1:46 PM