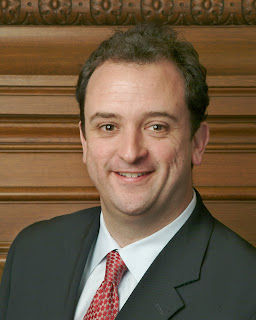 Please take a moment to review Supervisor Sean Elsbernd's report on his efforts to reform the pension rules for employees of the City and County of San Francisco as well as Muni drivers' salaries, below:

On Tuesday, the Board of Supervisors submitted to the voters an amended version of my Charter proposal on pension reform. Instead of calculating final retirement compensation based on average salary for the final 36 months of service, the amended version instead calculates compensation based on the final 24 months. This change will reduce on the cost-savings generated by the proposal, lowering the total amount that the City will save by one third - or $250 million over the next 25 years.

While I would have preferred the version that generated additional cost-savings for the City, I recognize the importance of progress on the pension issue, no matter how incremental, and will support the amended version. The amended proposal will still generate some cost-savings for the City by the increasing pension contributions from new safety workers from 7.5 percent to 9 percent and increasing the months of service on which final retirement compensation is based.

Pension reform is too important an issue to ignore, and I hope you will join me in supporting this ballot measure on June 8. Please be assured that this is only the first step on the road to meaningful pension reform and that I will continue looking for other ways to address the significant challenge that increasing pension costs pose to the City.

With Your Support SF Voters Will Have Say on Muni Salaries

In the coming weeks I will begin collecting signatures for a voter initiative that will change the City charter to allow the MTA to negotiate Muni driver salaries. The measure is designed to save the City money by allowing the MTA to freeze salaries during difficult economic times and to eliminate work rules that lead to system-wide inefficiencies. The initiative will provide MTA management greater flexibility in making difficult budget choices by allowing the transit agency to prioritize services for riders and not salaries for drivers.

Currently, the MTA is facing a deficit of $16.9 million and a projected deficit of $60 million for next year. Unfortunately, the MTA has no ability to negotiate Muni operator wages because the Muni operators’ salaries are set in the City’s charter. As a result, Muni drivers will receive an $8 million raise while the MTA management is forced to balance the budget on the backs of Muni riders and car owners.

I am asking the people of San Francisco to support my voter initiative. In the coming weeks voters will have the opportunity to stand up and tell drivers that enough is enough and that there should be no raises when there are service reductions.

If you are interested in signing the petition or learning more about my Muni reform proposal please contact me at sean_elsbernd@yahoo.com. For all other questions, comments, or suggestions, please do not hesitate to contact me at sean.elsbernd@sfgov.org or by phone at (415) 554-6516.