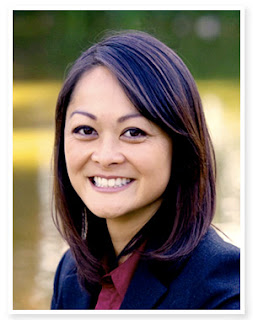 BOMA San Francisco Members:
Carmen Chu was honored with BOMA San Francisco's Public Official of the Year award for 2010 at the November 18th BOMA general membership luncheon at the City Club.
The BOMA Public Official of the Year award is given each year to someone who epitomizes the principles of good government, which, in these recessionary times, means making job growth and building a stronger local economy a top priority. Supervisor Chu has shown a remarkable degree of sanity, and common sense, while being in the middle of a sea of progressive ideologies and egos on the current Board of Supervisors. While the majority were busy discussing ways to tax business, Chu was thinking of ways to make it easier for businesses to do business with the City. Supervisor Chu is a fiscal conservative, and has consistenly opposed raising taxes, and fees. Supervisor Chu has been a champion for small business, and for creating jobs and growing our city's economy. Supervisor Chu has pushed for more accountability from city government departments, and the services they provide. She supported the recently passed MUNI reform measure (Proposition G) and the civil sidewalks proposition (Proposition L). She opposed the two local tax measures (Propositions J and N).    Prior to being appointed to the Board of Supervisors by Mayor Newsom in September 2007, Chu worked in the Mayor's Office of Public Policy and Finance, where she served as his Deputy Budget Director. In that capacity, she was instrumental in creating the city's 311 customer call center.
Supervisor Chu has two, not one, degrees in public policy. She graduated magna cum laude and phi beta kappa from Occidental College, and earned her Master's degree from the Goldman School of Public Policy at UC Berkeley.
Congratulations to Supervisor Carmen Chu: BOMA San Francisco's Public Official of the Year!
Posted by John Bozeman at 5:17 PM

Email ThisBlogThis!Share to TwitterShare to FacebookShare to Pinterest
Labels: BOMA San Francisco Public Official of the Year, San Francisco Board of Supervisors